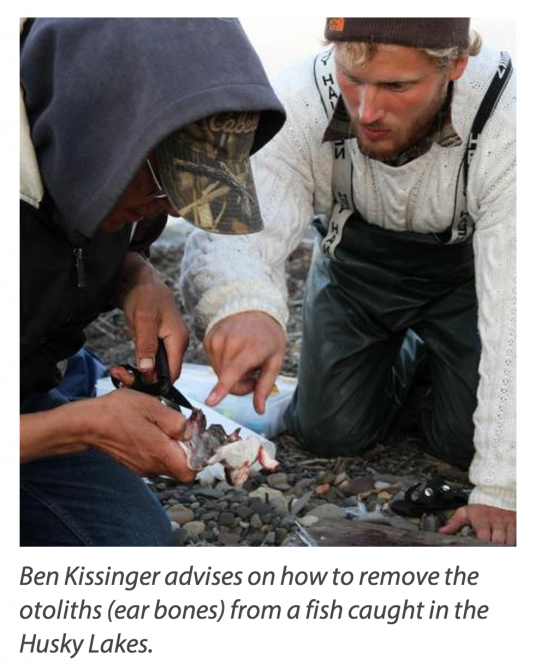 Ben Kissinger noted in this article

The Husky Lakes area is of great cultural and traditional value to the Inuvialuit. Situated between Inuvik and Tuktoyaktuk (Tuk), the Husky Lakes Watershed is a ‘true’ Arctic watershed, in that all waters originate north of the Arctic Circle. Fishing and hunting in the Husky Lakes by local people occurs throughout the year. Lake Trout and other fishes, as well as other wildlife, are harvested for subsistence consumption, to provide food for dog teams, or as recreational activity.Ben Kissinger advises on how to remove the otoliths (ear bones) from a fish caught in the Husky Lakes. This project evaluates the hydro-climatic drivers of contaminant transfer in aquatic food webs in the Husky Lakes Watershed. Click here to watch a short video explaining the project.The idea for this research project came about during consultations with stakeholders in Tuk. Members of the Tuk community pointed towards the Husky Lakes due to its importance to the community. Subsequently, an initial proposal was presented to the Tuktoyaktuk HTC in 2010. The proposal was developed by the researchers, with significant input from the Tuktoyaktuk HTC, local stakeholders and local experts. Funding was secured in 2011, allowing this multi-year project to commence in the fall of 2011.

The current study is co-lead by the Aurora Research Institute (Inuvik) and the University of Victoria (Victoria, BC). Community involvement and support is extensive and important for this study, as it is designed as a pilot project for future monitoring. It is inherently interdisciplinary, and involves many Inuvialuit, southern researchers and institutions in Tuk, Inuvik, Victoria, Winnipeg, and Peterborough. The study has three main aspects:

1. Traditional Knowledge on the Husky Lakes Ecology and Fishes.

Jennie Knopp conducted semi-directed interviews on Traditional Knowledge (TK) of the fish and ecology of the Husky Lakes with 14 local experts in Tuk in February 2012. Under Jennie and Chris Furgal’s training, one of the MSc students also completed three TK interviews in Inuvik in August 2012. Topics covered included fish species composition, fish health and fish habitat, as well as knowledge about the aquatic ecosystems, food webs and lake ice conditions. Many hours of interviews were audio recorded and… read more here.